How to Write Custom Connectors Print

Note: The following information is intended for developers and advanced users with expertise in integrating APIs and protocols.

Through Connectors, makeen transform enables the easy integration of mobile forms with an organization’s ERP systems, databases, CMS, and other kinds of business data systems. While there are numerous configurable connectors, including MsSQL connector, custom connectors which leverage the platform's connector API can also be created by developers and advanced users.

The following lines will explain Custom Connectors in makeen transform and how to create them.

Both types of connectors share common properties and functions. These are listed below.

This property returns the display name of the connector, which is what the user sees on the Connections page in transform Studio.

This property returns the icon of the connector or LOB system.

The value of this property is shown as a Data URI, which comprises four parts: a prefix ( data: ), a MIME type indicating the type of data, an optional base64 token if non-textual, and the data itself. For instance, data:image/gif;base64 can be used for the base64 encoded data of a PNG image.

This function acts as a blueprint for the parameters which this connector requires to connect to a third party system. For example, a database connector would require the parameters hostname, port, username, password, and database name.

This function can be considered as the first step in a connector’s usage lifecycle as it is called before invoking any service methods. The value returned by this function will be passed as a parameter to every subsequent servicing method call.

This function returns all the entities which this connector needs to expose. An entity is a logical data structure with a few properties. It is supposed to expose data objects from the underlying server. An entity also specifies the structure in which data exchange may happen between the connector and makeen transform. For example, a database server may expose each table in the underlying database as an entity. Each column within a table would then be exposed as a property of that entity.

For authentication connectors, entities can be used to describe the parameters for functions like Login, Registration, and ChangePassword.

This property indicates whether a connector can and wants to expose a URL as well as handle incoming HTTP requests targeted specifically for the connector.

(Note: This functionality is not fully available at the time of this document’s release, and it is not utilized as of now. However, it may be available in the future for specific use-cases.)

This is the core function which will be called upon receiving an incoming HTTP request that a connector should handle.

(Note: This functionality is not fully available at the time of this document’s release, and it is not utilized as of now. However, it may be available in the future for specific use-cases.) 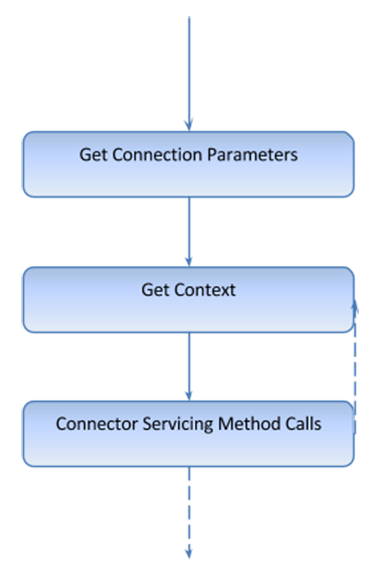 Diagram: Lifecycle of a Connector

Authentication connectors perform a number of basic login and user session-related functions. They can be categorized into two kinds of connectors:

The features an authentication connector can support are listed below.

This function takes a dictionary of login credentials as input and returns a LoginContract to indicate that the login was successful. This LoginContract acts as a token supplied by the platform to identify the user who was authenticated. It can be used in subsequent calls to other connector functions.

This function validates if a provided user has a specified role assigned or not.

This function confirms whether or not a LoginContract object is still valid.

This function returns an object of the class LoginContractCodec. It is used to serialize or deserialize a login contract object. This mechanism is important for the platform to function since login contracts need to be serialized and stored as strings in the platform’s persistent storage.

The LoginContractCodec should be able to serialize the LoginContract object as a string and reconstruct the same object from the string representation that it returned earlier.

Note: Some functions are no longer used because they have been replaced by other functions or are not needed anymore. The following functions may be removed in a later version of the server side release:

The features a data connector can support are listed below.

This function generates a preview of the underlying data structures that will be created on the underlying LOB or third party service upon calling the GenerateEntities function.

This function allows the generation of underlying data structures based on the Entity definitions it deems necessary for the application’s functionality.

This function exposes any notification definitions that it deems necessary to makeen transform.

This function is supposed to return any notifications (instances) that need to occur immediately based on a notification definition retrieved earlier by the GetNotificationDefinitions function.